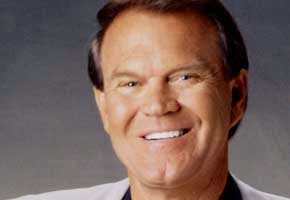 Glen Travis Campbell (born April 22, 1936) is an American country music singer, guitarist, television host and occasional actor. He is best known for a series of hits in the 1960s and 1970s, as well as for hosting a variety show called The Glen Campbell Goodtime Hour on CBS television. WIKIPEDIA During his 50 years in show business, Campbell has released more than 70 albums. He has sold 45 million records and accumulated 12 RIAA Gold albums, 4 Platinum albums and 1 Double-Platinum album. He has placed a total of 80 different songs on either the Billboard Country Chart, the Billboard Hot 100, or the Adult Contemporary Chart, 29 in the Top 10 of which 9 peaked at number one on at least one of those charts. Campbell's hits include his recordings of John Hartford's "Gentle on My Mind", Jimmy Webb's "By the Time I Get to Phoenix", "Wichita Lineman" and "Galveston", Larry Weiss's "Rhinestone Cowboy" and Allen Toussaint's "Southern Nights".